Check out the latest statistics and insights on contactless payments in the U.S.

Contactless payment is an incredibly fast and convenient way to make purchases. Despite the benefits of contactless payments, the majority of small brick-and-mortar businesses in the U.S. were a bit slow to adopt this “touch-free” payment method. However, the COVID-19 pandemic changed all that.

In order to keep their doors open without compromising the safety of their staff or their customers, businesses had to upgrade their credit card processing solutions. This article highlights some intriguing statistics regarding contactless payments. Our experts also discuss why this method is the future of both in-person and online shopping.

What Are Contactless Payments and Their Types?

Before we jump into the statistics, it’s important that we review the definition of contactless payments.

According to Investopedia, contactless payment is “a secure method for consumers to purchase products or services using a debit, credit, smartcard, or another payment device by using radio frequency identification (RFID) technology and near-field communication (NFC).”

Consumers can make purchases by tapping their payment card or smartphone while holding it in close proximity to a POS (point of sale) terminal. Businesses like restaurants, fitness centers, beauty salons, and retailers can deploy POS terminals compatible with contactless payment solutions.

By doing so, they can make the purchasing process more convenient and safer for their clients. Contactless payments can be grouped into two broad categories: 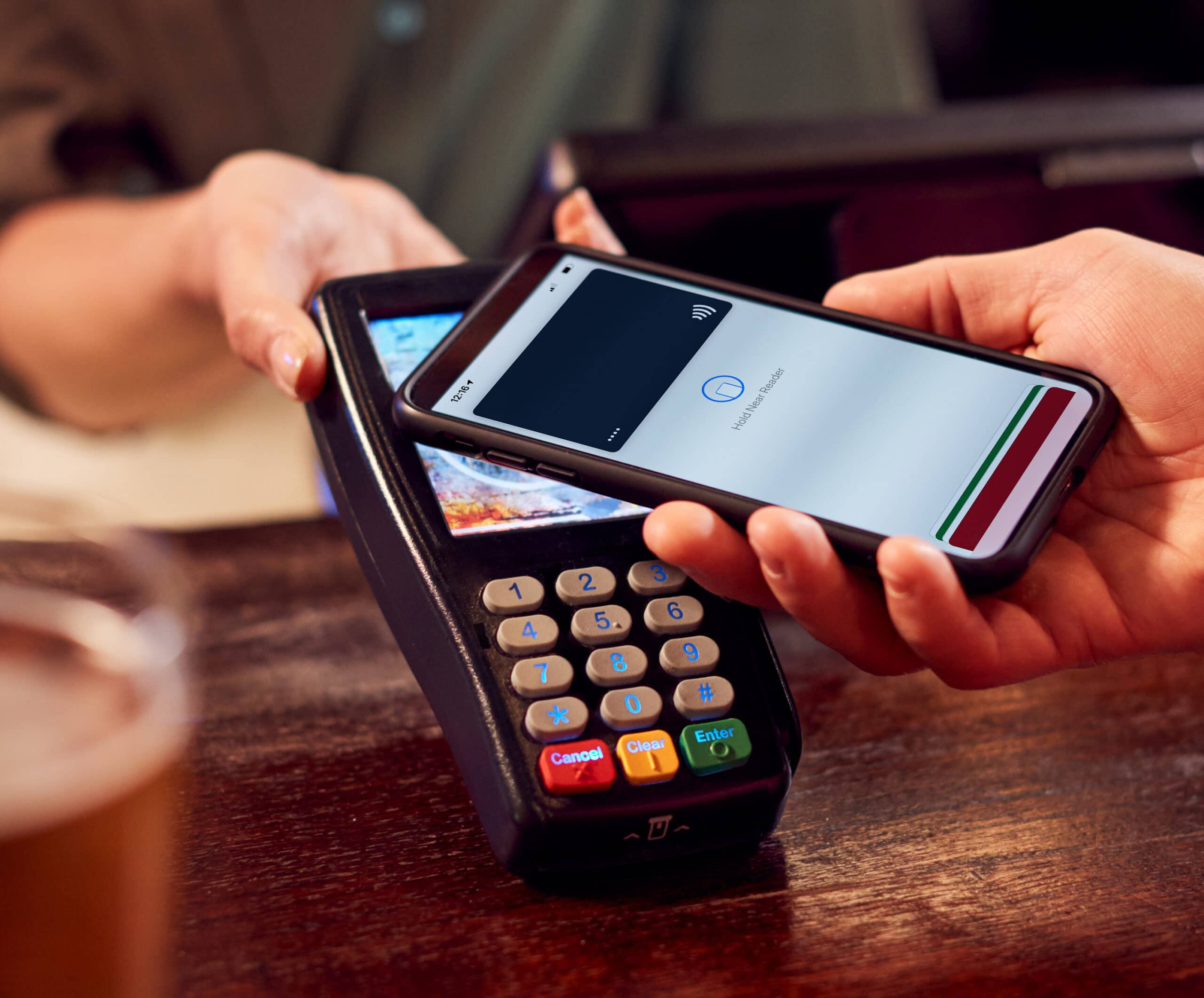 Mobile wallets are perhaps the most popular form of contactless payment, with approximately 150 million Americans saying they’ve used this method at least one time.

Samsung, Google, and Apple all have digital wallet applications. Most Apple devices have the Apple Wallet app pre-installed. This app allows users to make payments using either their phone or iWatch.

Google Pay is an app that users can download on both Android and Apple devices. However, the pre-installed Apple Wallet is a bit more convenient for most Apple users.

Samsung Pay functions much like the other two mobile wallet options. Once installed, users simply need to upload their card information and can then begin making payments.

Certain credit cards are also contactless. These cards have a chip embedded in them that can emit short-range radio waves. When consumers place their card close to an NFC-enabled POS system, the payment information is shared.

Many financial institutions refer to this process as “tap-and-go” or “tap to pay,” as no contact is required to transfer the information. The card only needs to be within a few inches of the device to send the payment info.

The downside to contactless payment cards is that people can use them without entering a pin or signing a name. If the card is lost or stolen, someone else could easily make purchases at any retailer that accepts contactless payments.

Conversely, mobile payment apps require users to provide a pin or perform facial recognition verification before they will “unlock” the wallet.

Fortunately, most major card issuers have addressed this security concern by placing a limit on the amount that can be charged using contactless payment. Prior to the pandemic, they limited tap payments to $100. However, they have since increased that threshold to $250 for all touchless credit cards.

Between the transactional limits and the card issuer fraud policies, consumers are well protected in the event that their card is lost or stolen. 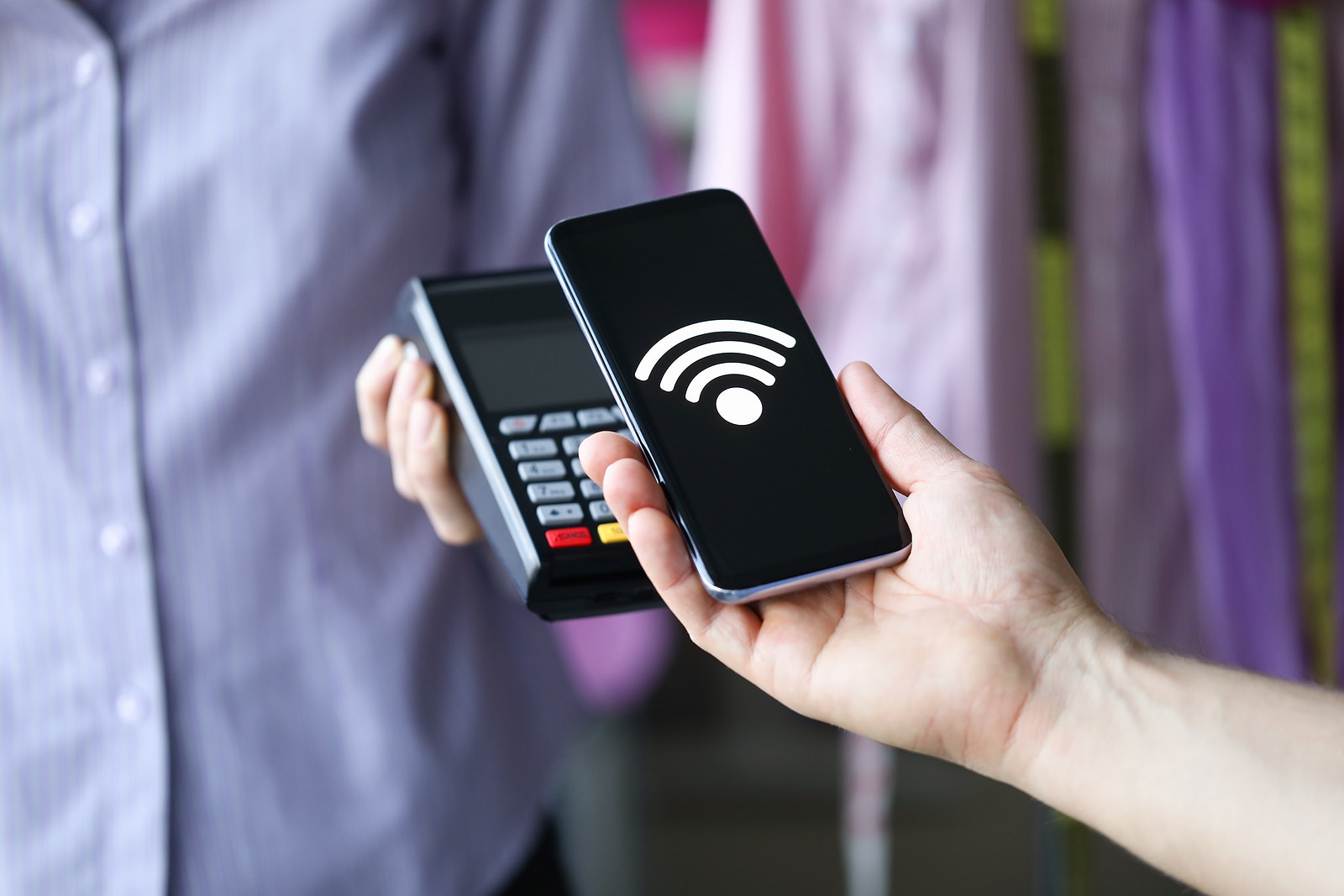 Quick Key Facts and Trends About Contactless Payments in the US

In the midst of the pandemic, Mastercard conducted a study on contactless payments. They found that 46% of respondents had put contactless payment cards at the top of their wallets. Over half of consumers under 35 made this change to their purchasing habits.

In addition, Mastercard discovered that the majority (82%) of participants consider contactless payment to be a safer way to pay. Mastercard also learned that contactless payments could be up to ten times faster than other methods. This speed means that consumers can efficiently enter a store, make their purchases, and get out.

Even as the world begins to stabilize, contactless payments appear to be here to stay. Roughly three-quarters of the participants of the Mastercard study stated that they would continue using contactless payment options after the pandemic.

In the United States, consumers are primarily using their contactless payment methods to purchase essential items such as groceries. CNBC reported that approximately 85% of transactions at grocery stores were conducted using contactless options.

The transit industry lagged behind, with only about 9% of transactions being conducted via contactless methods. However, this is likely due to the widespread quarantines and transition to remote work.

What Are the Leading Factors for Rapid Adoption of Contactless Payments?

Contactless payment options offer substantial benefits when compared to their traditional counterparts. These advantages are fueling the rapid adoption of contactless payment solutions by both consumers and retailers. A few of these benefits include:

When they were introduced, non-RFID embedded chips were hailed as a faster and more secure solution than swiping a card. However, those chips quickly wear out, making them difficult to read.

The result is that the buyer has to insert their card, wait to receive a prompt stating it was rejected, remove the card, and then reinsert it. If the chip is completely unreadable, then they will have to repeat this process several more times before the device will allow them to swipe the card.

However, contactless chips and mobile wallets really offer a significant speed upgrade compared to standard payment options. Within seconds, consumers can place their payment method near the NFC device and complete their purchase. 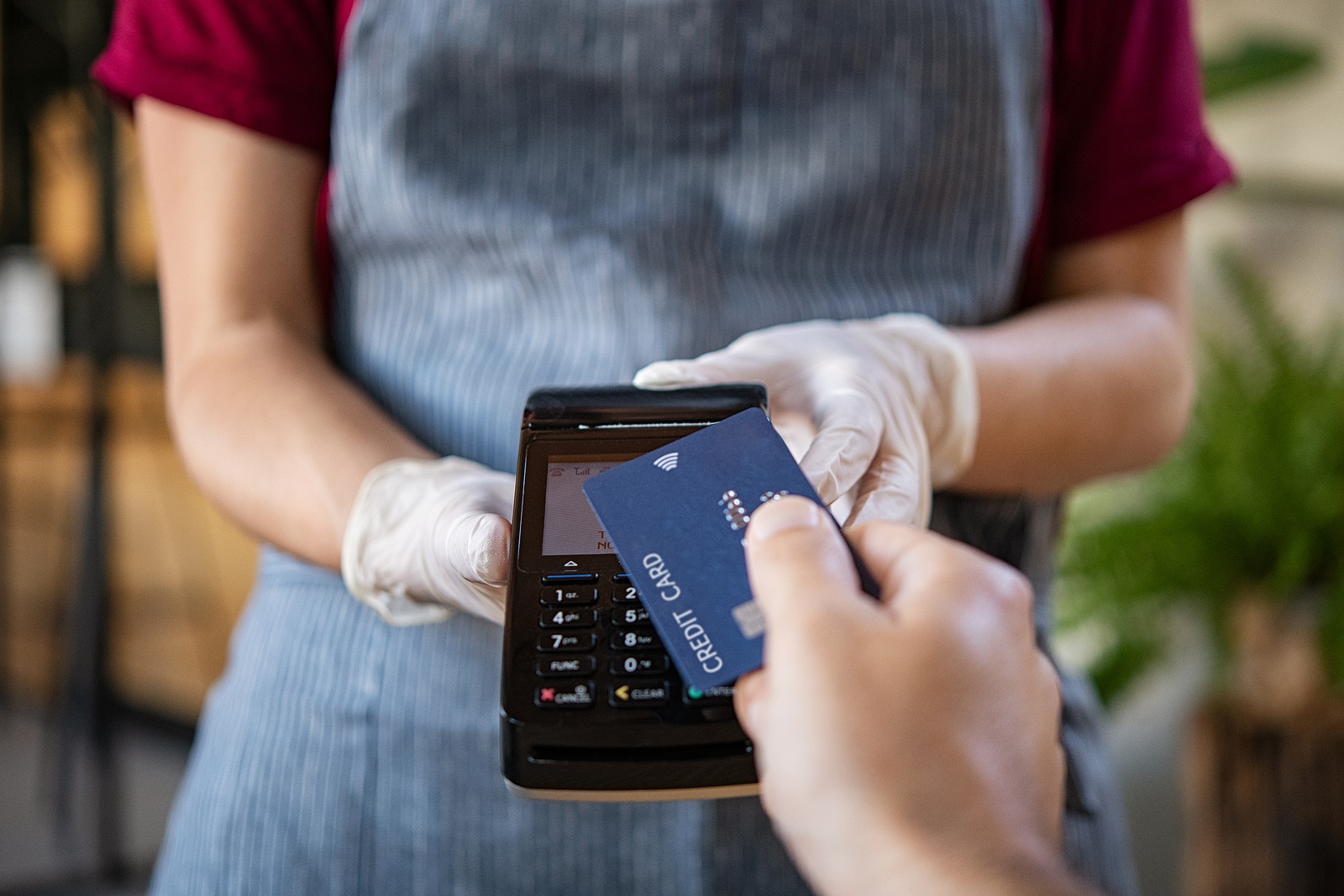 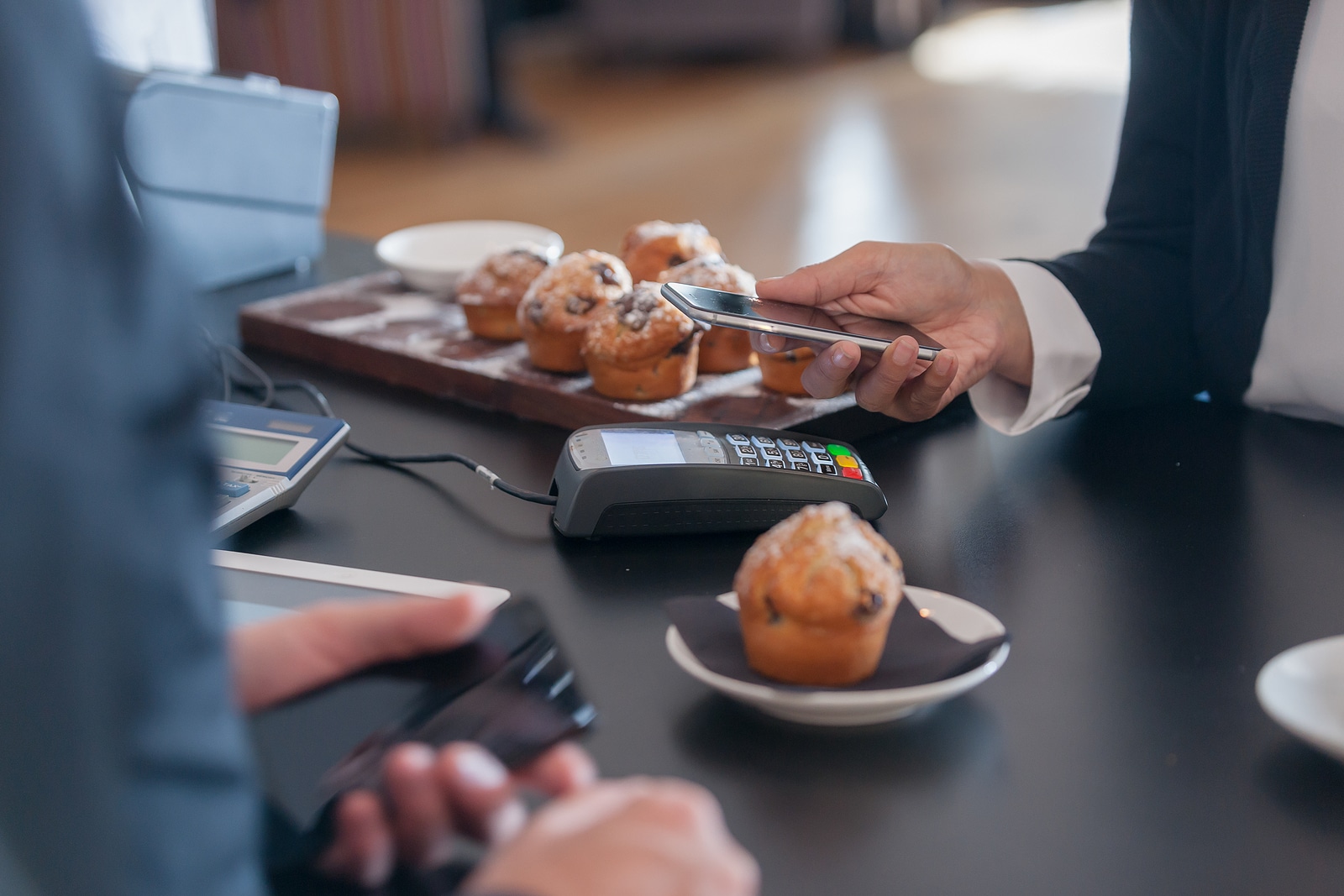 Most POS terminals are notoriously difficult to clean as well. Merchants have to be careful when sanitizing these devices, as oversaturating them could damage the keypad or other components.

Paying with cash is even worse as it is considered to be a fomite or inanimate object that can spread pathogens. According to Insider, currency changes hands 55 times per year on average. Since some viruses can live on surfaces for up to three days, cash can easily spread diseases between consumers and store staff.

Contactless payment solutions allow consumers to avoid any contact with the POS interface. They simply need to hover their mobile device or card over the NFC component in order to complete their purchase.

Both magnetic strips and EMV chips tend to wear out rather quickly. This wear and tear occurs every time they are used to make a payment. Cards are also damaged from being repeatedly placed in and removed from a person’s wallet.

Contactless chips are less prone to damage-related failures. Many of these cards will last for years before needing to be replaced. Mobile wallets are even more durable, especially if the owner has their smartphone secured in an impact-resistant case. 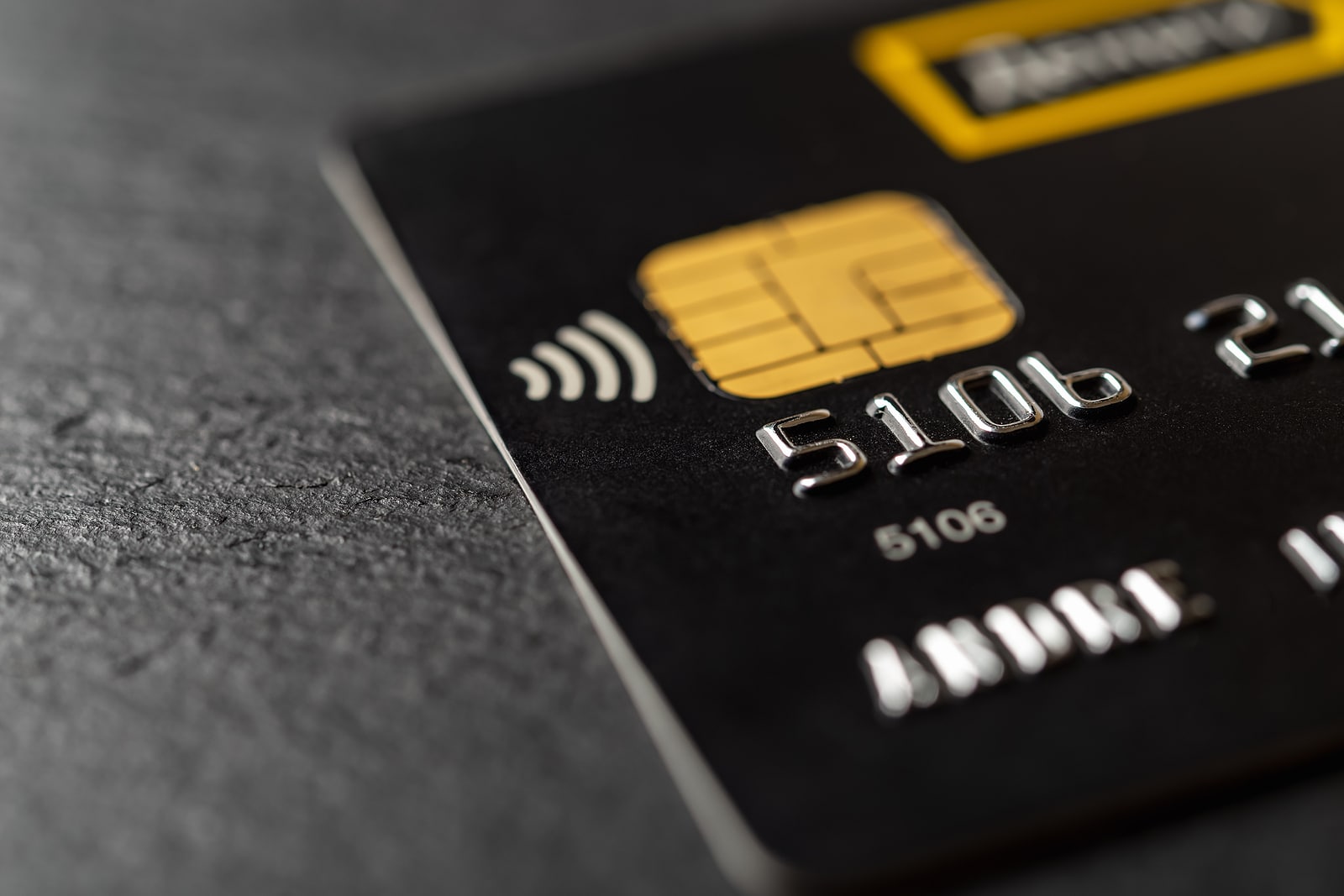 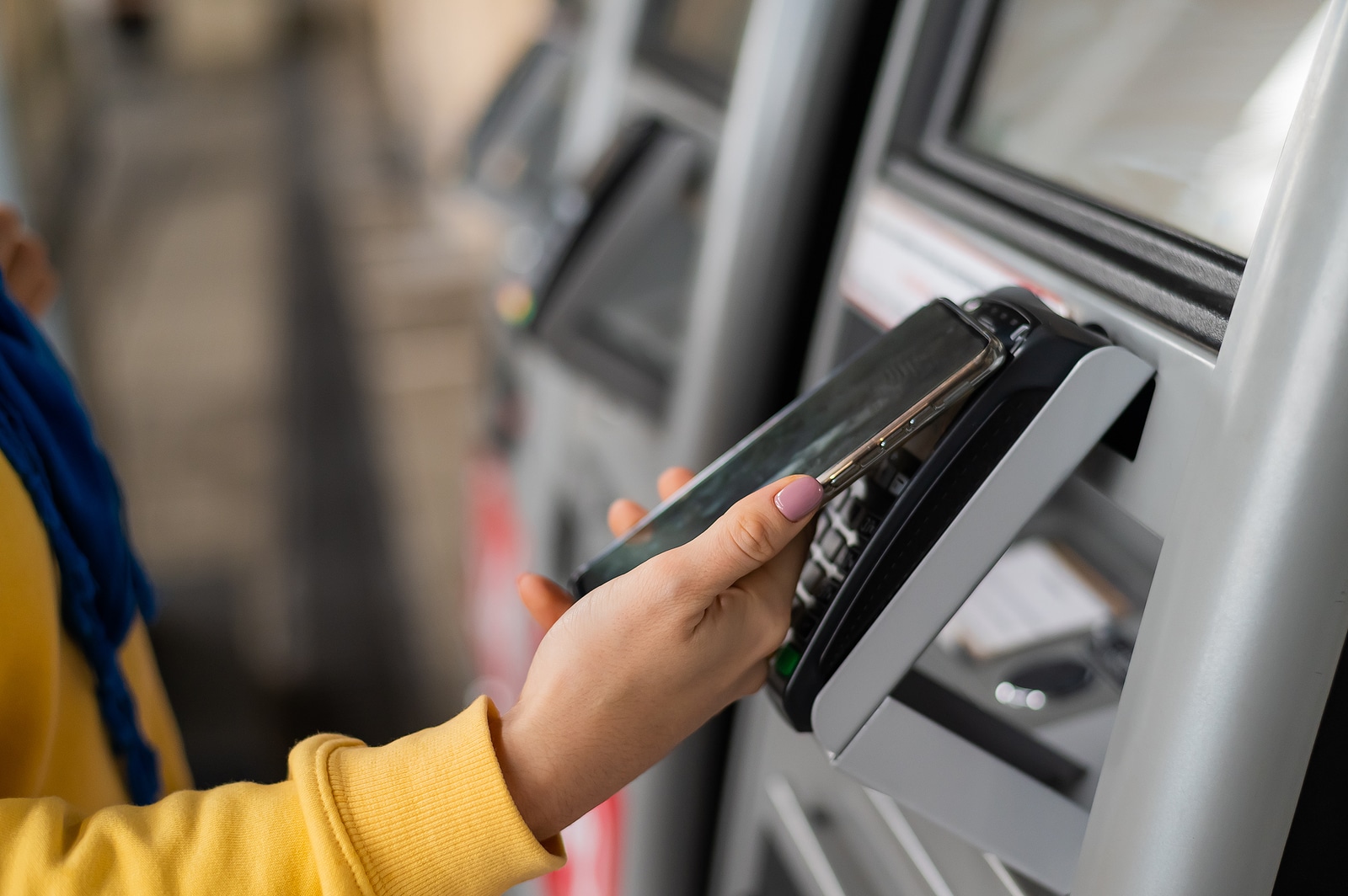 Even though many nations still have stringent travel restrictions in place, contactless payment solutions are more convenient for this purpose.

While the U.S. was a bit slow to adopt contactless payment technology prior to the pandemic, Europe was not. Most European nations have transitioned away from PIN or chip-based POS systems in exchange for NFC solutions.

What Percentage of American Adults Use Contactless Payment?

Approximately 51% of American adults are now using at least one form of contactless payment. This figure includes both mobile wallets and tap-and-go credit cards. In response to this trend, many merchants are upgrading their payment processing technology so that they can accept contactless payments.

As of late 2020, approximately 58% of merchants are capable of processing payments from digital wallets and contactless cards. Even more merchants will likely make the change by the conclusion of 2021, as many modern consumers prefer to make payments using contactless methods.

What Percentage of Credit Cards From an Issuer Bank Are Contactless-Enabled?

There is no cumulative data on the percentage of credit cards that are contactless enabled. However, all of the major players are including this technology in most newly issued cards. Some, such as Chase and Capital One, have been offering contactless cards for several years.

What Percentage of Debit Cards From an Issuer Bank Are Contactless Enabled?

Recently, the American Bankers Association conducted an extensive review of the “Contactless Economy.” They discovered that only 11% of debit cards were contactless-enabled as of 2019.

During their research, the ABA determined that a staggering 87% of debit cards were projected to be contactless by the end of 2022. According to Ed Gross of the ABA, “with more contactless debit usage on small-ticket items, banks will earn more interchange on an expanding line of revenue.”

This opportunity to increase revenue is the primary reason why so many Issuing banks accelerated their rollout of contactless payment-enabled debit cards.

How COVID 19 Accelerated the Use of Contactless Payments

While the opportunity to tap into the “contactless economy” certainly encouraged banks to begin issuing contactless payment cards on a large scale, this “economy” likely would not exist if not for the pandemic.

The challenges of the pandemic forced consumers and retailers to rethink the way they interacted. Contactless payment was viewed as a safer way to make purchases because it minimizes physical contact between public surfaces.

Prior to COVID-19, only a small percentage of American adults were using contactless payments. That figure grew by tens of millions in 2020 and is projected to reach 101.2 million in 2021. There is no question that this rapid transition to contactless payments is directly linked to the coronavirus pandemic.

The Future of Contactless Payments

As you can see, the numbers speak for themselves. Contactless payments are here to stay and is revolutionizing the way consumers shop.

Mobile wallets, in particular, are poised to be an integral part of the purchasing experience in the coming years. In light of that fact, businesses must ensure that they are equipped to process these types of payments.

That’s where we come in. At Finical, we provide our clients with cutting-edge payment processing solutions. Our experts offer custom account services as well as small business, mobile, and online credit card processing.

If you would like to learn more or speak with one of our team members, contact Finical today!

American Express may require separate approval | Apple Pay is currently available only in the United States. | iPhone and iPad are registered trademarks of Apple Inc.| Android is a trademark of Google Inc.